The Quail's Guide to Reporting the News

This handy print out and keep guide will help you to make your very own news articles in just a few simple steps!

This week: the art of the opening paragraph. 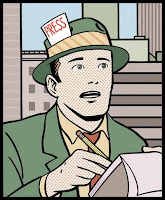 Step 2: Find a recent article about something engaging and, ideally, contraversial. In today's lesson we will be looking at the story of a baby born after genetic screening eliminated the possibility of her developing breast cancer later in life.

Step 3: Highlight the first paragraph of the article, then press Ctrl+C followed by Ctrl+V on your own website/newspaper/weblog. In our practice article, the opener is:

'The first baby girl in Britain to have been screened before conception for a genetic form of breast cancer has been born, doctors said on Friday.'
Step 3: Now for the fun part! Change some of the words just enough so you can pretend you wrote it. Also, try to sex it up a bit. Reuters can be a bit boring - they try to write things 'impartially'. Pfft.

Now we'll look at how you might rewrite the original paragraph.

If you work for the BBC try removing some words for 'punchyness': 'The first baby in the UK tested before conception for a genetic form of breast cancer has been born.' Bam!

Grauniad hacks might have a go at mixing up the syntax a bit, but not too much: 'The first British baby genetically screened before conception to be free of a breast cancer gene has been born, doctors said today.'

Torygraph readers are old and like complicated, difficult to read sentences, so add some more words and then rearrange them: 'A baby girl, the first in Britain genetically screened to be free from a potentially deadly breast cancer gene, has been born at a hospital in London.'

If you're writing for New Scientist, you may wish to add some sciencey words that would scare ordinary newspaper readers away: 'The first UK baby genetically selected to be free of a form of breast cancer - caused by a gene called BRCA1 - has been born in London.' Don't worry - your readers are geeks and like acronyms and words with numbers in them.

Times journalists like to add some of their own words, perhaps by describing how the news has been received by others: 'The birth of Britain’s first baby screened to ensure that it was free of the breast cancer gene carried by a parent was hailed yesterday as an important advance in the fight against genetic disease.' This adds another dimension to the opener beyond the plain old facts and contextualises the story.

If you're writing for Fox News, just leave the orginial exactly the same as you saw it on Reuters - nobody will notice as your audience can't even read properly: 'The first baby girl in Britain to have been screened before conception for a genetic form of breast cancer has been born, doctors said on Friday.'

However, the most fun is to be had writing for The Daily Mail. To write a successful Mail opener, you will need to become familiar with advanced techniques like subtle condemnation and outrage invention: 'The first British baby designed to be free of breast cancer has been born into an ethical storm.'

Notice the clever use of the word 'designed' right next to 'baby'. The word is used here to introduce the idea of 'designer babies' and artificiality, setting up a lovely juxtaposition between the natural and the unnatural, the acceptable and the abject, and, more fundamentally, right and wrong, which is a key aspect of all Daily Mail articles.

Writing in the Mail, you must always bear in mind that issues are always black and white; either something is right or it is wrong. It can be good or bad, but never in between. This is what lets Mail readers see things with far greater clarity than anyone else, whose minds may be clouded by left-wing nincompoopery, hoodie-hugging ridiculousness, or carbon-offsetting piffle. Hoodies, for example, are bad and so should not be hugged. Carbon is good because we are made of it, so it should not be offset. Babies are good because they are cute, but 'design', which represents science and understanding, is bad. Therefore, the good should not be impinged upon by the bad. In just one sentence we have already come to the conclusion that this genetic screening stuff is bad, using the undeniable truth of right and wrong. In lesser publications, this conclusion might have taken the entire article to come to, which makes them all rubbish and The Daily Mail really good.

The next thing to observe is the phrase 'ethical storm' tacked onto the end of the sentence, which you may notice wasn't even suggested by any of our other examples. You might wonder why this is.

The answer is that it has mostly been invented by none other than the Mail's writers themselves! Daily Mail editorial regulations stipulate that there must be an elevated sense of drama, controversy and/or outrage by the end of the first sentence. In our example, it has been assumed that readers won't bother to carry on reading some boring science story unless there is some kind of moral issue at stake. Mail readers also like nothing than getting angry at things, and they associate with stories in which a large number of people have already become angry. It makes them feel like part of a group, rather than sad, isolated, bitter xenophobes.

The last point to bear in mind if you're writing for The Mail, is that it is crucially important not to forget your trusty companion, hyperbole. Loaded words such as 'storm', 'fury', 'outrage' and 'war' might seem far too silly to describe such things as BBC programming or where Geoff Hoon's kids go to school, but, actually, Mail readers enjoy being shouted at and such words help them imagine that they really are having a vicious argument with some wooly-minded liberal.

Make sure you read more of The Quail's unmissable guides to journalism next week, including: Photoshopping with Microsoft Excel and Buying Circulation with Free DVDs
Posted by D. Quail (expat) at 20:00

Email ThisBlogThis!Share to TwitterShare to FacebookShare to Pinterest
Labels: designer babies, how to