Here We Go Again, Get A Sense of Humour etc.

Yet another ungrateful foreigner with no sense of humour has launched a race claim against her employer, just for failing to prevent 'sex, race and religious discrimination'.

Mona Awad, 'a married Muslim woman', is seeking a staggering £1m from banking giant HBOS after two members of senior management made a few harmless remarks about how 'ridiculous' it was that she was fasting for Ramadan and whether or not she 'could handle two men'.

The men are also alleged to have asked Mrs Awad if she was 'shagging' a client, made comments about a colleague wanting to sit on her lap, followed her into the women's toilets, expressed distaste at working with 'Asians' and lifted up her trouser leg.

Awad claims that cuddly, friendly HBOS is 'a sexist culture in which staff were afraid to speak out' and 'just a boy's club'.

HBOS has accepted that some incidents took place but denies liability for the actions of the pair.

The readership of one BNP recruitment pamphlet, however, rolled their eyes at the absurd prospect of yet another non-Brit pretending to be the victim of discrimination: 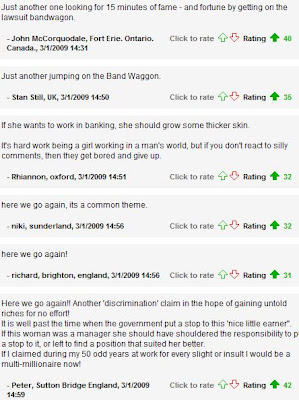 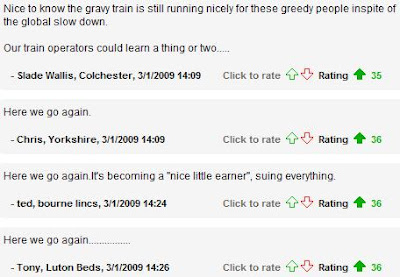 The Mail has pulled out the big guns for this story now; the orginal article, written by our favourite hack 'Daily Mail Reporter', now reveals its true author - none other than our favourite idiot, Julie Moult.

Julie appears to have tidied up the language and updated a few bits. The original first-line description of Mrs Awad as 'a married Muslim woman' has been changed to the slightly less perplexing 'A Muslim banker'.

The amount being claimed has also rocketed from the original 'six figure sum' to £16.7 million.

However, The Mail's website no longer carries the original article, and searching for Mona Awad yields only the newly Moulted version. Google doesn't seem to have a cached version of the previous article, prompting some critics to question the Mail's policy on editing and rewriting previously published stories and denying readers the opportunity to compare with older versions.

Does this mean 'mistakes' and falsehoods can go unchecked, so long as articles are 'cleaned up' at a later date? Hmm.