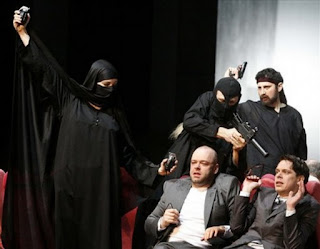 'Fanatics' writing on the forum of a 'fundamentalist' Islamic website are compiling a 'hit list' of prominent British Jews, including Surralan Sugar, Amy Winehouse, Lord Levy and David Miliband.

It is understood that The Mail has already provided the address details of Levy and Miliband and advised on the most efficient methods of assassination.

On the Ummah website, a terrorist calling himself 'Saladin1970' asked fellow un-Christian, non-white extremists for help gathering the names and addresses 'of british people who support Israel', before posting links to publically available lists of members of the British Jewish community. Chillingly, another forum member by the frighteningly realistic name of 'Abuislam' replied: 'Have we got a list of top Jews we can target? Can someone post names and addresses?', suggesting that he was going to get them.

Although it was later revealed by Ummah administrators that 'Abuislam' was in fact a British journalist called Richard Tims who had 'posed as a Muslim to make Muslims look bad', insiders noted that it didn't really matter that the poster wasn't a genuine extremist, or even a Muslim at all, because he accurately represented all the bad things about Islam that people are scared of. 'He's real alright', said one source who wished to remain anonymous. 'Not real in the literal sense of the word, but he's out there, somewhere, and he wants to blow you up.'

Saladin1970's undeniably threatening words: 'It would be beneficial to start compiling a list so that we can write polite letters reminding them of the injustices of israel' prompted The Sun, The Mail and The Telegraph to remind readers of the increasing number of anti-Semitic attacks since the Israeli invasion of Gaza, all of which were probably planned on the Ummah forum:

'Hamas leaders have attempted to whip up sentiment against Jews around the world in retaliation for the Israeli attacks. Mahmoud Zahar, the group's leader declared this week that even children were legitimate targets', said The Telegraph...

...while The Sun made the connection with another well-known terrorist group: 'Al-Qaeda’s second-in-command Ayman al-Zawahiri called on Muslims yesterday to strike Western and Israeli targets “wherever you can”'

But it was Daily Mail commenter Harvey N Lawrence who summarised the situation most eloquently, suggesting that the sick ravings of polite letter-writing Saladin1970 reduced him to a sub-animal state of grotesque murderous zealotry, just like all other Muslims: