Absolutely nothing happened in the world yesterday, but fortunately one newspaper made use of its extensive network of anonymous reporters to deliver the groundbreaking news that a vicar redecorated his church, a family in Essex walked on a frozen lake and a man in Colorado nearly fell off a ski lift.

Shining a light for investigative journalism, the mysterious 'Daily Mail Reporter' - who may or may not be Julie Moult - went to great lengths to weave a story worthy of national attention from what other newspapers might dismiss as an 'irrelevent pile of local interest tosh', finding a person in Kent to say something about Rev. Ewen Souter's outrageous removal of a disturbingly morbid depiction of Jesus being crucified.

Although the sculpture 'was frightening local children', one scandalised church-goer said: 'Next they'll be ripping out the pews and putting sofas in their place, or throwing out all the Bibles and replacing them with laptops. It's just not right.' It is thought the removal of Christ was something to do with health and safety, political correctness and the nanny state all simultaneously going mad, and therefore the blame lies with Gordon Brown.

Meanwhile, Liz Hazelton found that there just weren't enough celebrities going out without makeup or being too fat/too thin, so, in a pioneering departure from tradition, turned her wrath to a random couple in Essex who walked on a frozen lake with their young daughter. Flying in the face of critics who might naively suggest that it is not a newspaper's place to criticise ordinary members of the public innocently enjoying a day out with their family, pictures accompanying Hazelton's article slammed the couple as 'lethal', 'crazy' and 'slippery'. One insider said: 'Where were the New Labour nanny state 'elf 'n' safety Nazis? They should have banned this sort of thing. But, if they had banned it, that would be disgraceful and yet another example of 'elf 'n' safety gone mad. I'm confused. What was the question?' 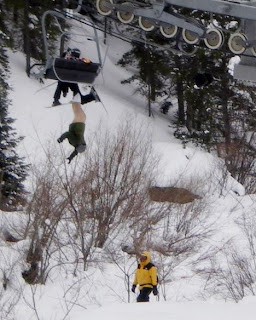 Rounding up a day of mind buggeringly banal reporting, the Mail's FOREIGN SERVICE found itself lacking the funds to journey to countries where things were actually happening, so instead filed a story about a man in Northern America who suffered 'the most embarrassing thing that could happen on a ski lift'. After falling through the seat of his ski lift, the man found one of his skis lodged in the lift's machinery. His pants then fell down as he dangled precariously above the piste, which meant you could see his bum and stuff. Just like in that film, or was it The Simpsons.

Don't miss tomorrow's Daily Mail for the story of a local duck that ate a pensioner's bread - and then came back for more, the man who tripped over curb in a Labour council controlled area, and more shocking reports on how cold it is.
Posted by D. Quail (expat) at 21:50