Only days after global fury erupted at the existence of a Facebook group set up by hate-filled Tesco employees to mock innocent tax-paying customers, another furore has been triggered by revelations that staff at Waitrose have formed their own group on the social notworking site to hurl abuse and obscene language at patrons of the high end supermarket.

Vile terms were thrown around with abandon by members of the group, including one employee shockingly branding a female customer 'a dirty old loon' and accusing her of smelling bad. It remains unclear whether or not the lady in question is indeed old or how bad her odour really is.

One member of staff from the Manchester branch of the supermarket, which is part of the communist-esque John Lewis group, described people who rummage through bargain bins as 'pikey skanks'.

Reassurance that the actions of the staff in question would not go unpunished thankfully came earlier today when The Daily Mail fearlessly published the name of the Facebook group alongside a picture displaying the unobscured names and photgraphs of a number of group members, ensuring their imminent dismissal and bravely ignoring British privacy laws.

An altered version of the image currently accompanying the story can be seen below, as inside sources suggested that it may be removed as soon as The Mail's legal team realises it's a gross invasion of privacy because of 'Human Rights' EU stasi censorship gone mad. 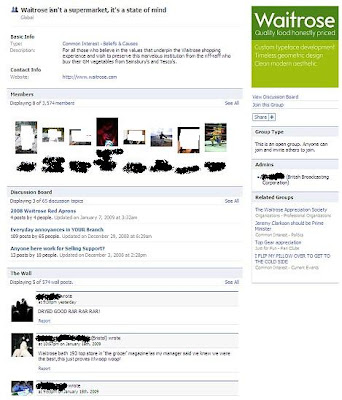