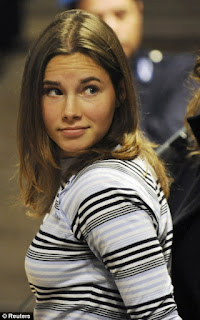 The name on everybody's lips is going to be Knoxy, according to a scandalously exciting front page headline in The Daily Mail accompanied by a sensational picture of attractive murder suspect Amanda 'Foxy' Knoxy looking cute.

Covering the proceedings at the beginning of Knox's trial, or 'Show', for the brutal murder of Meredith Kercher, Nick Pisa described the sensual scene as 'the 21-year-old...smiled serenely', entering the court room 'like a Hollywood diva sashaying along the red carpet'. It is unclear why Knox, who was wearing a plain zip up top, stripy sweater and jeans, might have looked like a Hollywood actress to anyone but the most peverted fantasist, but sources suggested that it might be something to do with the fact that she is pretty.

Foxy Knoxy and her young lover Raffaele Sollecito are accused of murdering housemate Meredith Kercher after an exciting drug-fuelled sexual game went wrong. We will spare you the arousingly graphic details of the crime. 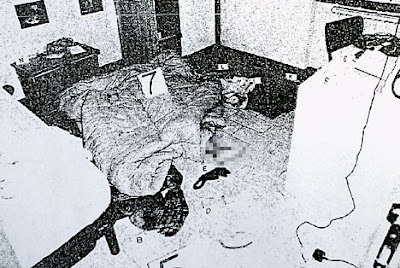 Kercher, who was also an attractive young woman, was found semi-naked with her throat cut in her bedroom at the house in Italy she shared with Knox, shown above. If you look really closely you can even see where the dead body lay, although unfortunately it is blurred out.

A third suspect, Rudy Guede, 22, has already been found guilty of murder and sexual assault and was given a 30 year jail sentence after a fast track hearing last year. Media coverage of Guede's trial has, however, been scant compared to that of Knox as he is not as particularly attractive.

Knoxy has received a great deal of press interest since first being accused of the sexy crime, with some especially infatuated newspapers going so far as to publish passages from her diary, print personal pictures found on her Myspace account and describe in minute detail her deliciously ironic dress sense.
Posted by D. Quail (expat) at 19:54