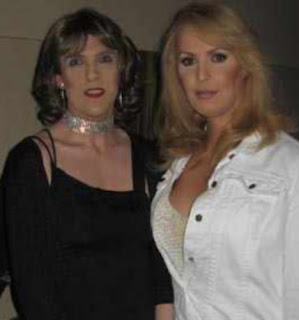 Herds of lasciviously made up transvestites have comandeered the parish community centre of a sleepy Hamshire town in a bid to 'turn' local residents, it was revealed today.

The good folk of Liphook, one of Queen Victoria's favourite coaching stops, were unaware of the ladyboys' secret base of operations until one eagle-eyed local became suspicious observing a 'woman' perform a perfect reverse bay parking manoeuvere outside the hall.

'Never in my life have I seen a woman park like that without knocking the wing mirror off or reversing into another car', he said while painting the words 'Down with this sort of thing' on a placard.

Further investigations by concerned Liphookians found that the gender confused manladies - or 'trannies' - had been covertly hiring a room at the centre for several months to host salacious cabaret nights, dressing up sessions and ritual sacrifices. Evidence of plans to kidnap unsuspecting local children and force them to wear girl's clothes may or may not have been found near the scene.

Liphook parish council, which is responsible for the hall, is now facing a 'simmering rebellion' from villagers unhappy with the thought of sharing their corner of the country with amoral, godless perverts who probably do unspeakable things to each other in dingy alleyways at night. 'If they like dressing up as women so much, why don't they go and live there?', asked one disgruntled resident from behind his twitching curtains.

Leader of the Liphook trannies, Linda Bryant, said: 'We just have nice quiet evenings together. There's no sleaze or sexual element whatsoever', before sashaying back into the community centre to the tune of 'Young Hearts, Run Free'.
Posted by D. Quail (expat) at 18:47